The Cadi Ayyad University (UCA) has officially announced its support for the AFIPS Initiative through a letter of endorsement from its president Prof. Abdellatif Miraoui.

The UCA is very active at the African scale in the sciences of the Universe. It hosts in particular a very dynamic astronomical observatory (Observatory of Oukaimeden, in the Altas Mountains) led by our colleague Prof. Zouhair BENKHALDOUN, who is also a membe of the AFIPS.

The research themes in observational astronomy include detections and monitoring of small bodies of the solar system to exoplanets, meteors, lunar flashes, variable stars, comets, artificial satellite tracking and space weather. The Laboratory of Physics of High Energy and Astrophysics (LPHEA) is the scientific sponsor of the Observatory and has been classified, for more than 3 years, as UCA’s first research structure for its outstanding scientific output for the region (39 articles in peer-reviewed journals, 13 communications published in international conference proceedings, 5 Ph.D. theses defended for the period 2015-2016).

It should also be noted that UCA hosts another research center related to planetary and space sciences. The Ibn Batouta, focuses his activities on the geological studies of martian analogue terrains on the Earth and offers a platform to test the instrumentation of the future Mars exploration mission.

With the support of the AFIPS and thanks to a scholarship from the OSWD organization, the first Ph.D. student in Astrophysics from Senegal (Salma SYLLA, Université Cheikh Anta Diop, Dakar) will come to take advantage of UCA’s infrastructure and observatory to achive observations of impact flashes of Jupiter. These flashes occur during the re-entry of comets or other bodies of the outer solar system, and their observation aims to quantify the flow of matter in the outer solar system colliding with the giant planets. A first visit will take place in fall of 2018, and regular stays will take place throughout the duration of his doctorate. 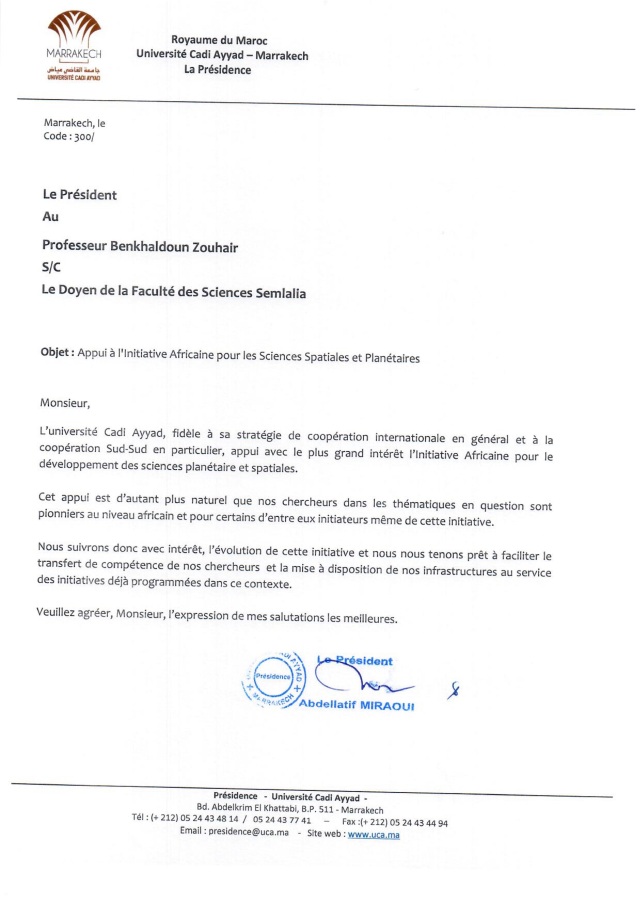